Wildlife Images is a Sydney-based photographic business owned and run by renowned Australian photographer Pavel German. With a collection of more than 50,000 images and a publishing arm, the business also runs photographic workshops, photography on commission and private lessons. 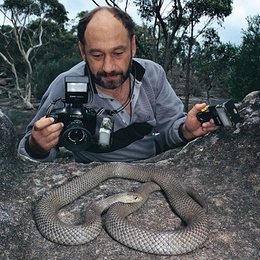 Pavel German is one of Australia’s leading wildlife photographers and publishes hundreds of images every year in Australia and overseas. His work has featured on various covers, calendars, posters, cards and in many books and magazines such as Nature Australia, Geo and Australian Geographic. He regularly photographs throughout Australia and the Pacific region. He has participated in many scientific expeditions, photographing numerous rare and unusual species, and has even discovered several mammals new to science in the process.
Pavel’s photographic collection represents the diversity of animals, plants and landscapes from Australia, New Guinea, the South Pacific, South-east Asia and North America. Pavel has particularly striking images of charismatic carnivores of the Northern Hemisphere, Australian marsupials, frogs and bizarre and beautiful invertebrates. Even the most common animals take on a fresh appeal when ‘captured’ by his lens.

Only a small sample of our image collection is available on the site. Please, email us your wish list and description of the job and we will get back to you promptly.

how to search for images

Australian Nature and Wildlife Images is a natural history photo library with a collection of more than 50,000 images of animals, plants and landscapes from around the world. We specialise in Australasia, the Pacific and South-east Asia, and have beautiful images of mammals, frogs, reptiles and invertebrates, including many rare and rarely photographed species.

To request an image, please email us directly including the image code/s or with a general picture request.